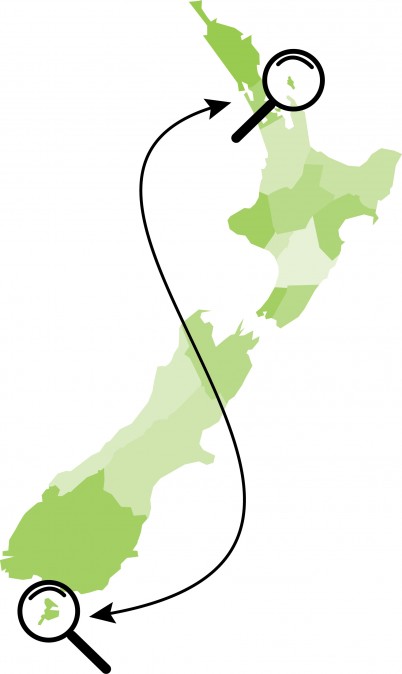 Each one of us knows that our own part of New Zealand comes with its unique challenges for providing … whether it’s the isolation and infrastructure on the West coast, traffic through Auckland or limited recruitment pool of… well almost everywhere!

But what about when the biggest barrier to support is being surrounded by tens of kilometres of open sea? We spoke with two brigade members to get a view on life on NZ’s most northern populated Island – Waiheke and NZ’s most southern populated island – Stewart Island/Rakiura.

As a CFO Bruce Sciascia considers himself lucky. With a large isolated community he’s been well provided for by Fire and Emergency NZ. ‘We have two stations on Waiheke,’ he tells us. ‘One in the main populated area of Oneroa and the other in the middle of the island in Onetangi. We have a well-supported and mixed brigade with around 33 members across a good age range. Depending on where a call out is we can use either of the two stations to get what we need and my team are very supportive. Whoever is nearest will respond via whichever station.’

Born in Levin Bruce, a builder and business owner, has lived on Waiheke for over 40 years and joined the brigade when he was at school some 33 years ago. ‘It actually gave me a good excuse to get out of school. Ironically I’m now spending a lot of time doing community work such as going back to school to do visits and waterslides in the summer. We do a lot of events including fairs and fundraisers and are heavily involved with other community groups on the Island.’

What is the nature of your call outs?

We get around 200- 220 call outs a year. We tend to only get around 10% false alarms, though as the population has grown we do see more pressure with increased need for fire alarms. We also have a Level 2 Line Rescue team since there is a lot of cliff faces. We no doubt see incidents rise dramatically in the summer months where we can see population explosions go up to 40,000 around Christmas and on any weekend we could have 2-3,000 weekenders over visiting the vineyards or for weddings.

When it comes to medical response we only have one ambulance on the island so often co-respond with St John’s.

So what are the biggest challenges his brigade have had to face we ask?

Continuity can be tricky. Less so recruitment as we have a high population but retention of the younger members who join then go off to university or college. Many might be with us for 3-4 years rather than long term.

Within my time the biggest fire we had to contend with was our main supermarket catching fire. We were not able to save it in time, so it was out of action for 4 months. This was a big deal to the community here since we don’t have many other options for groceries.

Ironically while being surrounded by water presents its own challenges, actually accessing water when there is no reticulated water on the island is a big challenge. This can particularly be difficult if we need to respond to anything away from the main town where there is a lot of bush and hilly terrain. We need to be able to respond in rural environments too, though when we’ve had bush fires in the past we can quickly get helicopter and monsoon bucket support from the mainland. 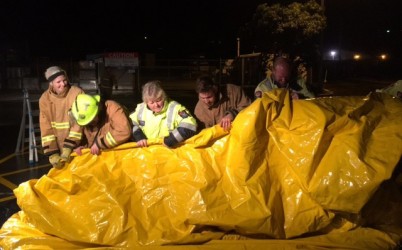 Despite any challenges the rewards of the role far out weight them. I’ve been CFO for two years after our long term and popular CFO stood down after 33 years. He passed away earlier this year. Before that I was DCFO for 15 years. This role becomes an integral part of your life and I find myself popping by other fire stations to say hello to their team whenever I’m travelling around New Zealand.

For twenty-six-year-old Mike Douglass he thinks he’s found his place for life. A Motueka native Mike moved to Stewart Island as a DOC Field Ranger four years ago and hasn’t looked back since. ‘Initially I thought I’d only come for a couple of years to enjoy the experience. But honestly I don’t know why I’d want to leave now,’ he says. 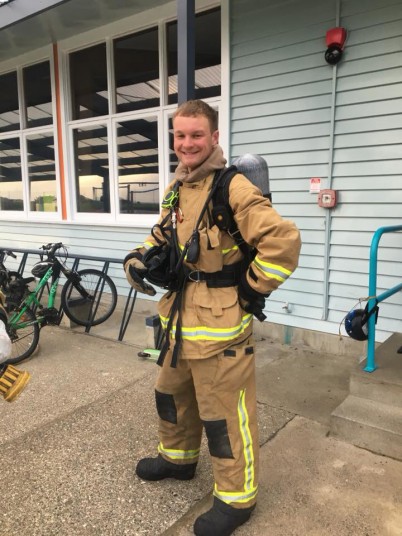 ‘With less than 400 people here the community operates like one big family. Community spirit means any disputes or issues get dealt with internally. Everyone looks out for each other and it’s important for neighbours to get to know each other since you’re reliant on each other for support.’

‘The voluntary service given to the local brigade reflects the kind of social aspect of the island. Here people work together and play together, whether that’s fishing, hunting or just boating with a good BBQ and venison! Here everyone volunteers to do something so it’s literally a way of life that sustains the community. Though when it comes to being a member of the brigade not everyone can do everything.’

‘We have residents here who cover a broad demographic and that’s reflected in our brigade. Some are millionaires while others have very little, yet everyone works and socialises together. There’s no cliques and no sense of class system. It’s very old school Kiwi in that respect which I like.’

Tell us about the nature of your call outs.

‘Well, we actually only get around 10-12 a year. 20 would be a lot. We don’t get a lot of activity due to the low population. People here have a great deal of respect for property and their behaviour so there’s no vandalism or graffiti or litter. I’ve spoken with six-year-olds who speak like adults because they hang around more with adults and they are very independent and respectful.’

‘We occasionally assist with medical response where manpower is needed and I’m part of Search and Rescue too. Life beacons have been a saviour for many trampers. If there is an emergency there is no doctor on the island only a highly trained nurse and a big volunteer group to support people.’

‘The biggest event we’ve had to deal with is a house fire last year that had an electrical fault. Unfortunately, by the time we could all respond – around 25 minutes - the house was well involved. All we could do was try to contain the fire.’

‘DOC has a small amount of rural equipment such as Aqualite pump and monsoon buckets and a trailor with rolls and rolls of forest hose. Almost all of our equipment including hand tools is contained ready to be picked up and flown by helicopter. For back up a helicopter could respond from Invercargill in about 20 minutes in the event of a big emergency, weather permitting.’

What are the biggest challenges for you?

‘We’ll only get around 10 people regularly come to our muster and training events. Despite a good number of able bodied fit people in the community there are many elderly and a lot of us have jobs that take us away from home for long periods of time. I might sometimes spend days out in the bush on DOC projects with limited cell phone coverage. This can also cause problems for responding to emergencies. Also commercial fishers will be out at sea for a couple of days at a time. So this means our brigade is dispersed over a great geographic distance.’ 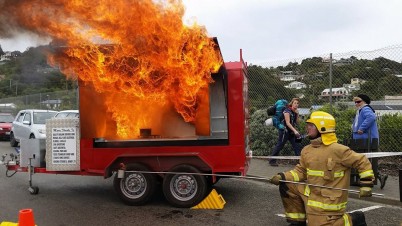 ‘Recruitment is an issue for us too. We see a lot of foreign workers employed through the pub and accommodation services. They might be here for 6 months but that’s not long enough to join the brigade and ensure continuity.’

‘There is no reticulated water for us anywhere on the island. We’ve only ever used a stand pipe in training on the mainland! All water needs to come from people’s private supplies or creeks. That’s the first challenge for the Officer in Charge – where will the water come from and get the portable pump. Another challenge we have is there is no other support form vehicles. Any vehicle has to be craned on and off the island and only when the tide is at the right level. There is no ramp like other places.’

‘But despite all the challenges the island is beautiful. It’s both laid back and busy. It’s a dark skies reserve. And it’s full of people who do massive amounts of community work. This community would completely fall apart without volunteering. It’s hard to say no but there’s only so much time any of us can give.’