On the Aussie fire front

On the fire front – FPS on deployment in Australia

Rains have provided much needed relief across Australia and helped firefighters contain the vast blazes in New South Wales. We spoke with firefighters Mike and Kieran from rural and forest fire specialists Forest Protection Services (FPS) about their recent deployments to our neighbours across the Tasman suffering their worst drought and subsequent fires in known history.

Fifty degree celsius temperatures and blustering hot 110kmph gales. Air arid and parched at a mere 8% humidity. Daily treks over 10km through isolated wilderness. These are just the start of the challenges that awaited FPS’ Mike Ihaka and Kieran Sullivan, as part of eight three-week deployments of 56 men and women provided by FPS since November.

‘The experience actually began with the smell of smoke coming through the plane on the approach to Sydney,’ says Mike. ‘Unprecedented is the word I’m hearing from my Aussie counterparts. These fires are the worst they have ever seen’, says the 32-year-old forest firefighter specialist, Crew Leader and FRFANZ member. A relative newcomer of nearly 4 years, Mike is proudly following in the footsteps of his father, FPS owner and FRFANZ Chair/UFBA Director Kevin Ihaka.

Twenty-seven-year-old Kieran echoes, ‘There is the permanent smell of smoke in the air. You get used it after a while and only notice once you’re back in New Zealand’s fresh air’. Mirroring much of Mike’s journey into the service, Kieran follows in the footsteps of his FPS Operations Manager father. With 10 years’ experience gained straight from school, Kieran is a young veteran having deployed to fires at Port Hills and Arthurs Pass in New Zealand and overseas in Chatham Islands, Canada and Australia.

Mike: ‘Everyone I’m speaking to echoes the same thing. These are the most challenging fires they’ve seen.’

What makes them so, we ask?

Mike: ‘Unpredictable weather is making the fire do things it wouldn’t normally do. For example one fire was being bolstered by westerly winds which instantly swung 180 degrees to north-easterly. Suddenly we’re having to retreat back and evacuate ourselves. At one point we had to retreat back beyond our evacuation zone as a town we were in was engulfed. When that happens there’s a need to be in evacuation mode plus rapidly move resources to where they are then needed. It’s extremely challenging.’

Kieran: ‘While some conditions were expected and basic fire principles applied we’ve also seen behaviour change. The sheer scale just makes it far worse. There is so much going on at the same time.’

Experience has been gained in New Zealand’s far North protecting private forests through backburning and clearance.

Mike: ‘Most of the team are chainsaw specialists, and we also employ Geographic Information Specialists who work with the Incident Management Team. One of our most dangerous encounters can be trees that can burn long after the fire front has passed. Our Hazard Tree Assessors are trained to know the signs and will often be first to assess an area. These chimneys as we call them, will burn through the core while the outside remains intact. Sometimes, outside of the main fireground, an ember may burn through a wound all the way up the centre to around 40 or 50 metres high and the tree will topple suddenly. They can be very dangerous.’

Kieran: ‘Our chainsaw teams are real specialists that have unique challenges. Different terrains have different trees, which have different densities and grains of wood and react differently. Heat stress from hardwoods can cause limbs to drop off suddenly at any time!’

Mike: ‘You learn to trust your gut instinct and remain cautious. Whenever we stop the tanker our Hazard Tree Assessors are the first ones checking trees nearby and around the truck.’

‘When you see the behaviour of the fire you understand how they’ve got 50-60km long fire lines and such devastation. When I first heard the front it sounded like a freight train approaching, getting louder and louder. I’d see the fire race to the tops of hills at speeds you could not run at and start spotting (where convection carries the burning embers). I’ve heard of spotting up to 30km away carried by thermals that are fuelled by the very fire itself. If you’re in front of a fire moving like that….’ Mike doesn’t need to finish that sentence.

‘In one pine plantation the fire was rounding up the wildlife forcing them to flee in all directions. At one point around 20 kangaroos were leaping past us jumping through burning embers. It’s no wonder you see them suffering the burns on their feet. The fire forces many animals into the open that you’d not normally see including spiders, snakes, lizards and of course koalas and roos. There’s such a vast array of wildlife but the burning just consumes everything. Often all that would be left behind is the blackened skeleton of a tree. It’s eerie. Sometimes we’d drive up to an hour and a half and it’s just black, barren, apocalyptic.’

So how do you look after your own wellbeing in such an environment?

Kieran: ‘You get a lot from the community. They are quite resilient and help each other out. You also form your own communities and meet people from previous deployments. Fire is our common ground so we can all relate.’

Mike: ‘You focus on small successes. Each day begins with a briefing and if that task has been accomplished that’s a win. Also members of the public are just so appreciative. It makes it all worth it but it also makes it very real when you’re there seeing the emotion first hand. You see people picking amongst the devastation, crying. They’ve lost pets, horses, their home. Or others are rushing to evacuate not knowing if their home will still be there. And yet people always thank you. The public come up to you offering donations of bottled water, sunblock, food. On one day off the locals took a group of us to a water park to relax and cool off.’

‘Seeing the humanity helps keep spirits up. Working with a close team, with friendship and trust, where we debrief each day and are comfortable to talk openly about problems is key.  Returning home to my wife and baby and liking what I do is of course so important.’

We asked what do those on the ground actually need?

Mike: ‘Really it’s just the basics. Good supply of drinking water, lunch and a good place to rest and sleep. When you’re dealing with this kind of challenge and devastation, you learn to appreciate the simple things in life.’

Kieran: ‘Make sure all those involved are recognised. It’s not just the firefighters but so many other agencies behind them like Red Cross, Army, State Services. And volunteers – people like tradees, people who feed us and house us through kindness and appreciation. The very least we can give is simple thanks to acknowledge what they give.’ 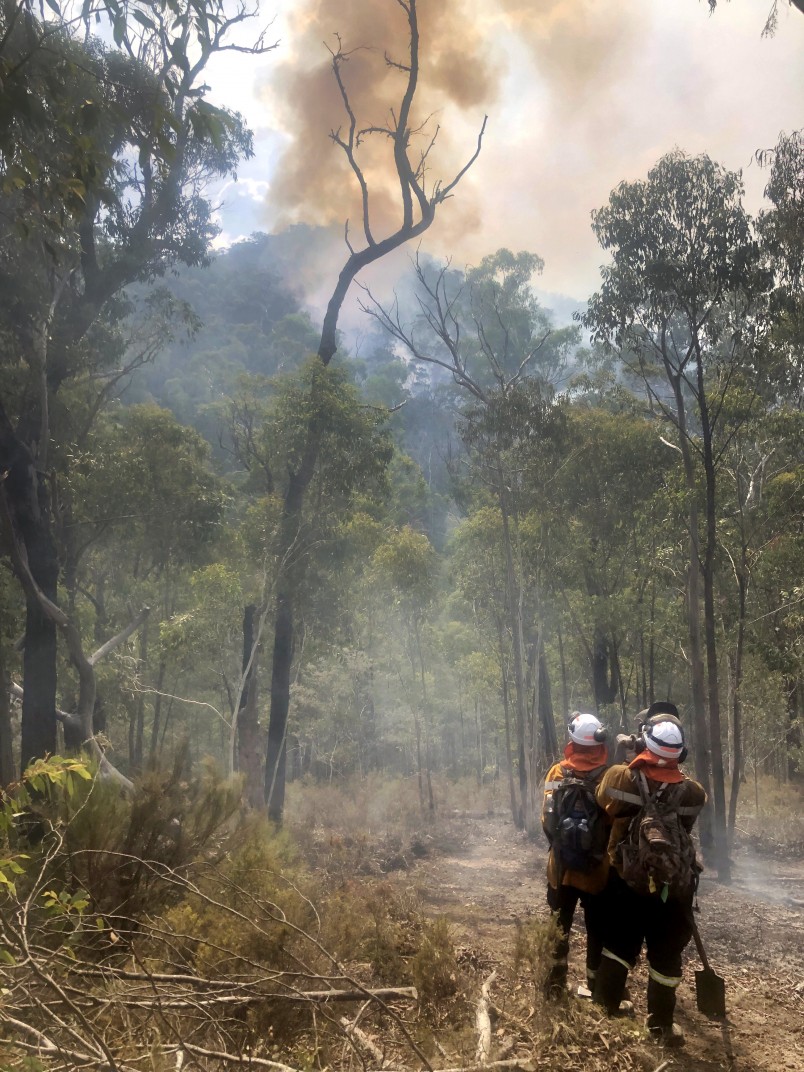 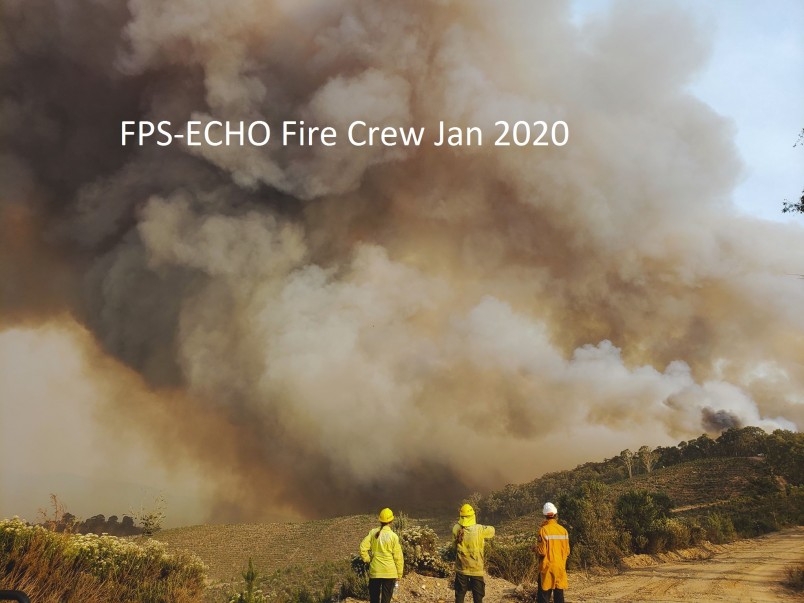 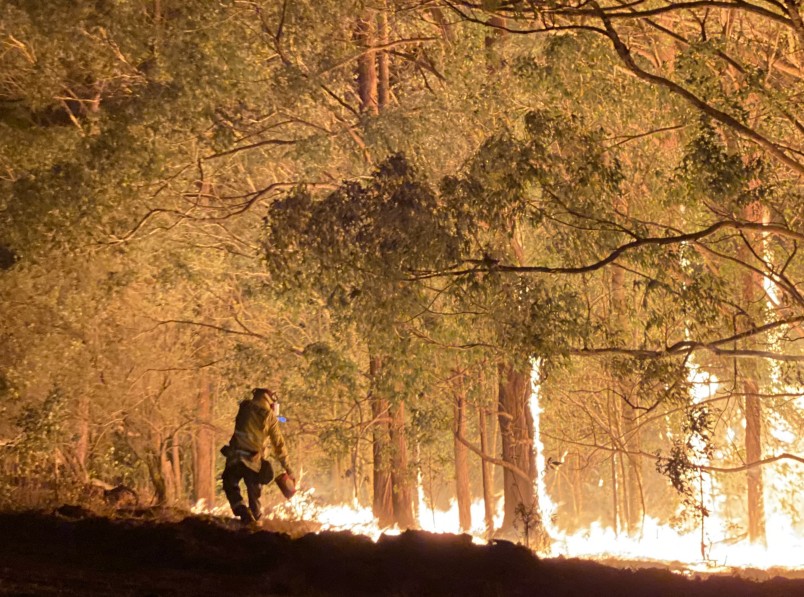