Panthers on patrol at Christchurch Airport

We spoke with Christchurch Airport Firefighter Dave Greensmith about the unique responsibilities of working in New Zealand’s second busiest airport.

Like the Thunderbirds, Christchurch Airport Fire’s arsenal of vehicles are numbered 1-5. We sit in Fire 5, one of three massive Rosenbauer Panthers that patrol the entire airport campus and terminals. Dave reels off figures like he’s holding a Top Trump card, ‘6-wheel drive, 33 ton, 705 horsepower’. These tanks, Dave relays, can carry 12,300 litres of water and B-class aqueous film-forming foam.’

It’s hard not to get excited by these beauties - each one worth $1.5M! But for a site with an annual revenue of nearly $200M it’s a small price to pay to protect the 7,000 employees and nearly seven million passengers annually. 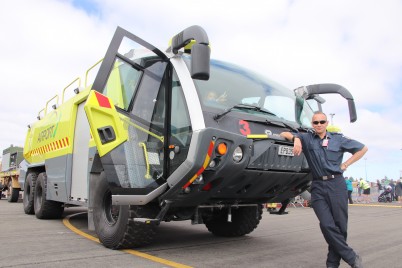 Describing a ‘normal’ shift Dave explains, ‘We’re trained as medical first responders and used for pretty much everything, including safety and security, hazmat calls (eg aviation fuel) and bird scaring. We’re responsible for our own firefighting training, though occasionally this might be conducted with FENZ urban and rural, so we can support large scale incidents like the Port Hills fire in 2018.’

‘That was an interesting day at the office’, Dave recalls. ‘We knew the capability of Fire 5 meant we could be used as a tanker to get the water straight up the hills. However the turning circle on this is 30 metres. At one point we were engulfed as the fire turned and we could not retreat. All we could see from the cab was red and orange. While we all know to always plan for an escape route we had no other option. Setting the canon to diffuse pattern we fought our way through. That two minutes felt like an eternity.’

More typically a day would see Dave and crew - one of four shifts that mirror the FENZ career structure - respond to medical emergencies, sometimes co-responding with FENZ or St John. ‘65% of our calls are medical with the rest including more domestic incidents like PFAs, but also MVAs around the campus.’

The campus is the wider airport complex and community that includes hotels, restaurants, warehousing, shops, car rentals, attractions, bus terminals and fuel stations. ‘Our equipment is interchangeable with St John so we can support them as well, but often we’ll be first to respond. There is a legal requirement for a Cat 9 airfield to maintain nine crew at any given time - otherwise it cannot operate.’

A firefighter of 17 years, 10 with Christchurch Airport, Dave previously was a member of the Turangi Volunteer brigade and figured ‘why not get paid to do what you love!’. He’s had to learn a lot since then. ‘We need to know the schedule of all flights and detail of every aircraft - how it works, where things are, the layout of the cockpit, where fuel and engine cut off is, the size and layout of the fuselage. This is so we can effect a rescue quickly and efficiently. We train for just a 90 second response, as that is all it takes for fire to puncture an aluminium hull. That’s how long we could have to save lives. There will be an A380 coming in just a moment.

That carries 320,000 litres of kerosene!’ Sure enough, two minutes later we see Emirates’ giant double-deck aircraft appear on the horizon. ‘We also monitor six radios including FENZ, airport comms, fire crew and control tower so it gets incredibly busy. 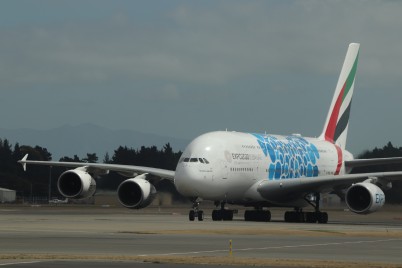 We do not go anywhere on the runway without absolute express clearance from Air Traffic Control. We also need to continually familiarise ourselves with the terminals, every lift, escalator and doorway. It’s like a rabbit warren and always changing so this needs reflecting in our continuous training.’

What are the best things about being an airport firefighter? ‘Definitely the variety. And occasionally we get to meet a celebrity. Ed Sheeren is my best so far.’ 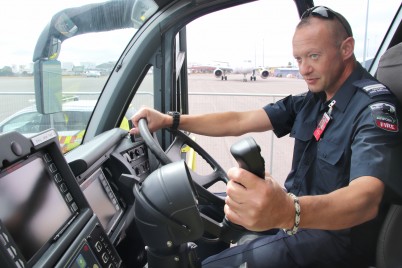