From Cadet to Command with Carmen

Waimangaroa lies north of Westport on the road to Karamea in the Buller district. Formerly a settlement for coal miners this is a small and low lying dairy town with beaches buffeted by strong currents and sea winds. For residents, like many across rural NZ, resilience is in the blood.

Carmen was only 11 and ‘mostly wasting time on motorbikes or fishing’ when her Mum told her to either get a job or a hobby. So she went for the latter. Of course at that age firefighting wasn’t an option but with support from her Aunt, CFO and advisor to UFBA’s Cadet Scheme project think tank Lynn Brooks, Carmen was able to find a route into the fire and emergency service.

‘My Aunt and SO Ed Colligan were running their own scheme to give kids something to do. About five of us would go weekly for an hour on Muster night. They did a great job of organising activities including baking and arts and crafts along with practical skills involving opening lockers and identifying each item, first aid, ladders and hose running.’

‘By the age of 12 I was familiarised with all equipment and tagging along to training nights. Crucially by the time I was old enough to join the brigade at 16 I wasn’t afraid or intimidated by everything, having already been ‘involved’ for four years informally. Within six months of turning 16 I had already completed my formal seven day recruit training with Fire and Emergency in Christchurch.’

Carmen perfectly illustrates the benefits running a cadet scheme can have for both recruitment and continuity. ‘I sometimes get sideways looks when people find out I’m a Senior Firefighter at just 21 years old, particularly being a young female. But I’ve already got my UFBA Five Year Medal which is pretty awesome. I’m proud of that.‘

‘While not everybody feels young people should be exposed to the risks of first responders the team have been great and very supportive. We have a special bond between the community and brigade and I really want to help. We know if anyone struggles or finds any part challenging then others will step in to support you and you don’t have to be exposed to anything you’re not prepared for.’

‘What a lot of people may not appreciate is how the fire station is the heart of our community. Our pub closed down, so did our school in 2012 and we have no shop. So it’s one of the only places the community can meet.’

‘The toughest call out I’ve attended was an MVA involving a workmate but often it’s the case in small communities that any victim will be known to the responders. We do get support however from other local brigades like Westport and especially Granity who we’ll sometimes train with.’

‘Firefighting is well suited to my job as a Dairy Farmer. Even my boss is part of our brigade and is very understanding, allowing me the freedom to respond or lie in if we’ve been to a late call out.’

‘Being such a small town we only get around 40 call outs per year including MVAs, house fires and storms, calling on our civil defense role. But we’re also seeing an increase in scrub and country fires. We even had a bit of an arsonist a year ago who caused some trouble for us.’

‘But even firefighting can have surprisingly touching moments like on Mother’s Day when I was fighting a large house fire at sunrise side by side with my Mum. It’s not how we expected to spend the day but at least it’s something we can do together.’

As Carmen trains to become Station Officer one day, she is now helping to run the brigade’s cadet scheme with Ed, the original programme leader who first taught her a decade ago. It’s the perfect example of succession.

‘We’ve now got nine cadets aged 10 to 16, so we’re pretty lucky. Our brigade are a good mix from our youngest at 19 to our oldest who is a retiree. It’s like a family, and they’ve helped me go from being shy and quiet to being confident and skilled. I love it and I’m going to stick around doing it.’ 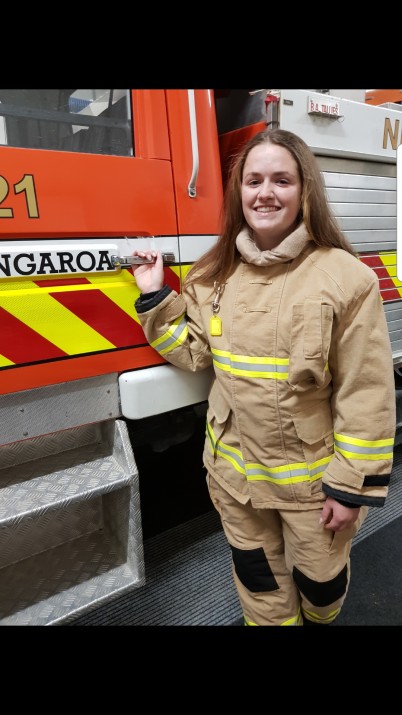